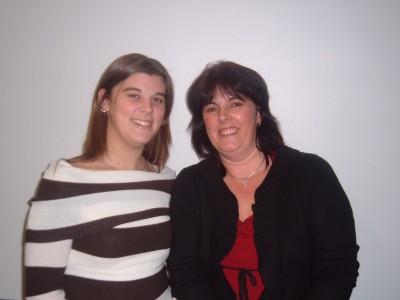 Tina and her daughter both suffered from migraine. In June 2006, Tina discovered Resolution Magic.  Tina was anxious for her eighteen-year-old daughter, Kerrie, to go through the programme first, as she was suffering migraine so often.   Kerrie had a migraine every 7-8 days, and she missed one day during the week, or one day at the weekend.  It was really affecting her work and her social life.  Kerrie began the programme and became free from migraine in just two weeks.  Kerrie’s case history is one of the shortest on record!

Tina, Kerrie’s mother, was very encouraged as a result of this, and started the programme herself.  Tina had migraine attacks about two or three times a month.  The very worst time for her was period time, when usually the migraine sent her off to bed with all of the usual symptoms; headache, nausea, and light sensitivity.

When Tina began the active sessions for the first time, it was for a migraine that had begun as a result of her having some wine the previous evening.   The migraine attack seemed to calm down after a few hours.  It was very encouraging.  Over the next few days, Tina found that she was combating many mini-migraines and headaches quite well, but it was very hard work.

One of the lessons everyone learns is how to just keep going when the going gets tough, and how to ‘just do it anyway’, even when it seems like it might never work.   There were many moments when Tina thought she might just give up, but then she thought, “No, I will just do it anyway.”

On one occasion, a really severe ‘monthly’ migraine appeared, and Tina wondered whether she would be able to tame this monster.  For many hours she used her technique.  Several times she wondered whether to give up and just go to bed until it was all over.  She was getting so tired, but each time the thought passed her mind as to whether to give up, she said to herself, “No, it’s not going to get the better of me,” and she carried on.  After three hours, Tina realised that her migraine had relinquished the fight.  She had won yet another battle.

On another occasion, Tina had battled late into the night.  She was at the point of giving up, and then she remembered that I had told her that sometimes the migraine throws itself into the ‘mother of all migraines’.  Tina knew that this was possibly what was happening, and so she also rose to the occasion and summoned up all of her energy.  “This is it. I am NOT letting it win”, she said to herself.   After two hours, Tina won the battle, feeling tired and battered, but victorious.

After that extremely ferocious attack, the following attacks were progressively much weaker. As time went by, Tina became much more confident.  Migraine didn’t worry her any longer because, even if it were to happen on an important day, she knew that she could send her migraine away in a few moments.

I happened to meet Tina several months after she had successfully used Resolution Magic for her migraine.  Tina told me that she was fine, but I noticed that she was wearing sun-glasses indoors.  I asked her how she felt about her eyes, and Tina said that she felt more comfortable wearing sunglasses, even on a cloudy day.

Tina used to have migraine twice a month on average, and her worst trigger was the lighting in supermarkets.  Light seems to play a major part for many people in migraine attacks.  Tina had mastered the Resolution techniques, and she no longer suffered migraine, but she was left with this remnant of light sensitivity.

I suggested that Tina should deliberately look at the daylight through a window, and do some active exercises for just a couple of moments, several times a day.  This was a relatively simple task for Tina, after the many weeks of hard work to make her frequent migraines disappear.

Each time Tina repeated the exercise, the light sensitivity halved, until it, too, disappeared. To this day, Tina feels perfectly comfortable in normal daylight – without sunglasses.